A Tale of Two Chapels

One hundred years ago, the Soeurs de la Visitation purchased a pristine five-acre plot of land in what was to become Ottawa’s fashionable Westboro neighbourhood, and erected a four-metre-high perimeter fence so that the cloistered sisters would be shielded from the world. Meanwhile, about a kilometre away, the finishing touches were put on the Westboro United Church (pictured, right), newly built to serve the congregation and the needs of the neighbouring community.

Although their missions were very different, by the end of the 20th century each organization had come to the same conclusion: Their shrinking memberships meant the time had come to sell their underused properties.

They’re not alone. As faith congregations amalgamate because of dwindling attendance, hundreds of surplus religious properties are expected to hit the Canadian real estate market over the next decade. The United Church alone is looking at as many as 800 over the next 10 years, according to Chris Henderson, a renewable energy developer and congregation member who led the search for a buyer of the Westboro United property.

After Westboro United amalgamated with two other congregations to become Kitchissippi United Church, the organization sold the surplus Westboro site in 2011 to Springcress Properties Inc. The developer is constructing 19 townhomes on the property, and has transferred the church building to the Ottawa Music Foundation, organizer of the annual Ottawa Bluesfest, so that it can be redeveloped to a community arts purpose.

The sisters, meanwhile, decided to sell their property in 2010 to Ashcroft Homes, which is in the process of building residential condos on the site. Ashcroft will also redevelop the only structures to have been built on the property – an 1865 mansion and the sisters’ 1913-built convent – as commercial space.

The lack of public consultation as to the fate of the sisters’ property had the community in an uproar. There were strong objections to the additional density and increased traffic that the development will introduce to the neighbourhood. Community groups, including the Westboro Community Association, couldn’t afford to challenge Ashcroft’s plans at the Ontario Municipal Board level, so they eventually reached a compromise in 2011 that, among other things, had Ashcroft agree to cap the building heights at no more than nine storeys, and to donate $200,000 for community improvements.

But now there’s an even larger Ottawa faith property on the market: The Oblate Fathers and the Sisters of the Sacred Heart are selling 30 largely undeveloped acres of prime land near Saint Paul University overlooking the Rideau River. In this case, the sale had been expected for some time. The Ottawa East Community Association, which represents residents and businesses in the neighbourhood, has committed to working closely with key stakeholders to ensure that the community is represented throughout the redevelopment process. Two years ago, the association created a community design plan that was approved by Ottawa City Council.

Mr. Henderson says some faith communities are torn between muddling along with their aging, expensive-to-maintain single-purpose built churches, or selling the properties to the highest bidder.

“What happens with many faith communities is they get tired, people get older, congregations shrink. They wring their hands, and at a certain point in time they go, ‘Oh boy, we only have one option: sell it,’ ” Mr. Henderson says. “Then they make a decision they don’t want to make.”

It doesn’t have to be an either-or proposition, says Mr. Henderson, who last month helped to organize a multi-faith symposium in Ottawa for discussing creative redevelopment ideas. Faith organizations are talking about how they can continue their missions in communities even after a sale – whether it’s continuing to provide community support, arts and cultural programs or affordable housing.

“There can be hundreds of years of faith history on a site. Congregations can bear the loss of history and legacy if they are creating a new legacy that respects their missions,” Mr. Henderson says.

As private property owners, congregations are within their rights to sell properties with no strings attached, or to stipulate how properties will be used going forward.

Here, in detail, are the redevelopment approaches being pursued by the two former faith properties in Ottawa. 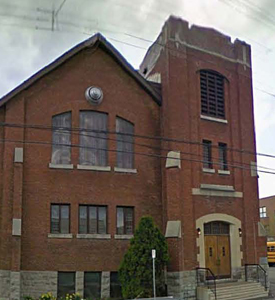 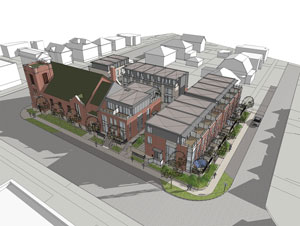 In 2010, the Westboro United Church offered to give the property to any one of 30 non-profit community and social groups, provided they could build a new facility on the site and retain the original church building. The project cost proved too prohibitive, so the property was put out for bid. Local community and heritage groups were consulted before the church accepted the bid from Springcress Properties.

“We thought there was merit in keeping the 1913 structure, so we went to Bluesfest and committed to transferring the church building to them for $1,” says Springcress president David Spillenaar. “They initially wanted to retrofit the church as a music hall, but the community was concerned about traffic and noise. So they agreed to create a loft space for their administration headquarters and develop the lower levels for community use.”

Another key reason the congregation chose Springcress is because its plan to build 19 freehold townhomes is the right size for the local community, Mr. Henderson says. The buildings are low-rise and won’t dwarf the former church, and they will have lower density than a condo tower, he says. The church is using 90 per cent of the proceeds from the sale to support community projects, while the remaining 10 per cent went to the local presbytery of the United Church to help meet the needs of new churches.

“The story here is about a different way of doing urban development… and doing it as a team with developers and the community,” Mr. Henderson says. 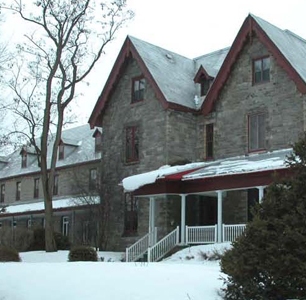 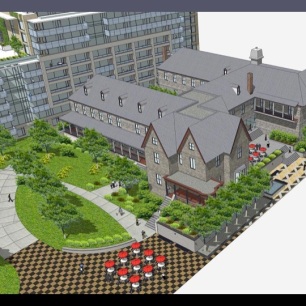 The sisters’ former convent is comprised of two parts: a Gothic Revival house built around 1865 (and the only surviving mansion from that era along this section of Richmond Road), and additional wings arranged around a central courtyard that were completed after the sisters purchased the property in the early 20th century.

The complex is a rare surviving example of a property that housed a cloistered religious community for more than 100 years and functioned as a self-sustaining entity for much of that time, according to a statement of cultural heritage value prepared by +VG Architects.

Ashcroft Homes is building eight residential buildings (a total of 1,000 condo units, plus a seniors’ residence), and will spend at least $4-million to transform the convent into commercial space for a restaurant, upscale grocery store and a 25-room boutique inn, says Ashcroft president David Choo.

Mr. Choo acknowledges the opposition to his condominium plan, and that many would have preferred the city or the province to have turned it into a public site. “But there were no funds to do that,” he says.

His vision from the start, Mr. Choo says, “was to make the abbey the centrepiece, and to fuse its historical nature with the new condos in a totally mixed-use environment. You will see a celebration of the heritage that was there, as well as new uses.”

This article was published on Nov. 11, 2013 in the Globe and Mail’s Report on Business (Commercial Property report).